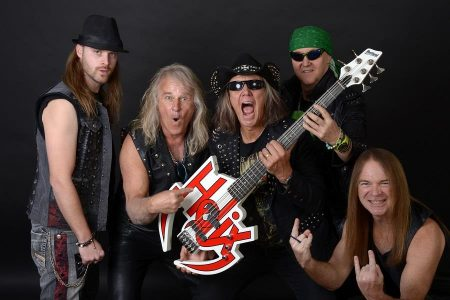 Canadian veteran hard rockers Helix have released a video for their latest single “The Devil Is Having A Party Tonight.” The single is available for purchase at CD Baby.

In an interview with Sleaze Roxx earlier this year, Helix frontman Brian Vollmer spoke about the upcoming new single: “Another thing that’s changed too is that I am writing with Gord [Prior] and Steve [Georgakopoulos] who wrote ‘The Power Of Rock And Roll’ album, I am writing with Sean [Kelly] and the band is also writing as a unit for the first time too. The next song is actually going to be a song that I wrote with the band which is called “The Devil Is Having A Party Tonight” and so, I think that by getting the band involved, this guys want to write and it gives them a sense of pride and a feeling that they’re involved in the project more so than just the live aspect.

But also, there’s competition with the other guys that have a proven track record which is ‘The Power Of Rock And Roll’ writers and Sean [Kelly] who I primarily write with nowadays. We have three songs — one by the band ready to go, one almost done with Gordie and Steve, and I have another one with Sean — and then in the spring, I am also doing a solo album but it’s mostly going to be cover songs with a couple of new tracks. That’s going to be with a different producer and it’s going to be a more rhythm and blues type of theme. It’s something that I have wanted to do for a couple of years and Sean and I have talked about it extensively. It’s actually the first time that I am telling anybody about it.”

Helix‘s “The Devil Is Having A Party Tonight” video:

© 2020 MusicHearts. Use of materials MusicHearts.ru allowed only with the active link to the source. All rights to the image and text belong to their author.
working on Lucky Framework 20.02 Mercurielle, 45
Common Questions info@musichearts.tv