Krokus frontman Marc Storace was recently interviewed by All Rock Music & All Music Bands: National & Worldwide and asked what are some of his favourite memories from Krokus opening for Def Leppard during the latter’s tour in 1983 in support of the Pyromania album.

What sticks in my mind today is the huge size of those American audiences and the enthusiastic atmosphere in those huge arenas. Pyromania is still my favorite album by Def Leppard and our Headhunter album earned Krokus our first USA Platinum. Headhunter is still very popular with our old and new fans today. MTV had a couple of our brand new videos on heavy rotation! Every night we got excited and motivated and gave our best, and the audiences loved our songs and all our shows. They showed their enthusiasm for our music every night from the bottom of their hearts. You should have heard them calling out for encores…so loud! What more could any musician want?

Storace was also asked about auditioning for the AC/DC lead vocalist position after Bon Scott‘s death to which he replied:

I had the chance to audition but did not. What’s important is that I have always remembered and valued the facts upon which I took that simple decision. It was the spirit of the moment. In the meantime I achieved a considerable amount of worldwide success with Krokus, and even though not on the same huge level as AC/DC of course, I am still very thankful for it. Also for the fact that, thank heavens, I am still enjoying the fruits of my labors with the majority of the original Krokus members today.

In terms of auditioning for the vacant lead vocalist position with AC/DC after Brian Johnson‘s hearing problems forced him to stop touring, Storace advised: “I was never asked to join AC/DC. A journalist asked me if I would turn down an audition again. I said no, this time I would take the opportunity, and Krokus would understand.” 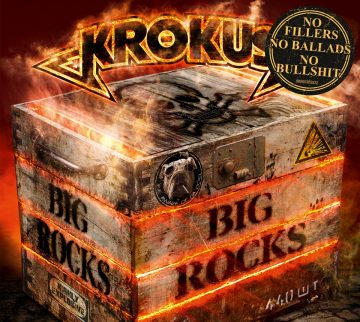 Krokus have just released a new studio album called Big Rocks which consists of cover songs. Storace was asked who chose the cover songs for the album to which he stated in part:

It’s always been the band’s tradition to jam out some favorite cover-songs as a warm-up for rehearsals or during soundchecks. Big Rocks, according to contract, is the last album in line for SONY Music, so that inspired Chris to finally produce a Cover-Album a la Krokus…an old idea which had been hanging in the band air since a few years. So we threw a whole bunch of song-titles into a hat and Chris picked the cherries.

© 2020 MusicHearts. Use of materials MusicHearts.ru allowed only with the active link to the source. All rights to the image and text belong to their author.
working on Lucky Framework 21.03 Mercurielle, 49
Common Questions info@musichearts.tv