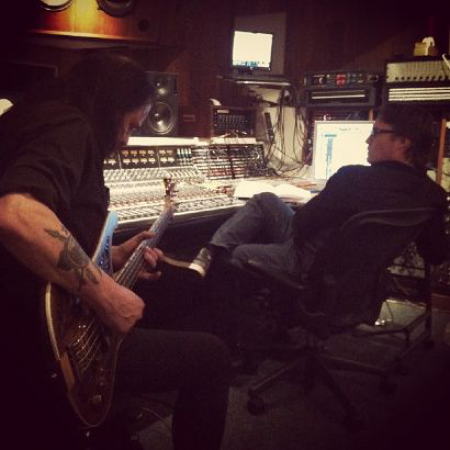 MOTÖRHEAD has entered the studio with longtime producer Cameron Webb to begin recording the follow-up to 2010's "The Wörld Is Yours" for a tentative late summer release. Songtitles set to appear on the CD include "Outsider" and "Silence When You Speak to Me".

A photo from the studio can be seen below.

MOTÖRHEAD released "The Wörld Is Ours – Vol 2: Anyplace Crazy As Anywhere Else" in Germany on September 21, three days later in the rest of Europe and October 9 in North America via UDR/EMI. The follow-up to 2011's "The Wörld Is Ours – Vol 1: Everywhere Further Than Everyplace Else" features the band's 2011 Wacken Open Air headline appearance as well as highlights from Sonisphere (United Kingdom) and Rock In Rio (Brazil) shows.

© 2020 MusicHearts. Use of materials MusicHearts.ru allowed only with the active link to the source. All rights to the image and text belong to their author.
working on Lucky Framework 20.02 Mercurielle, 43
Common Questions info@musichearts.tv