Tickets for the 2019 North American "No More Tours 2" shows go on sale to the general public starting Friday, November 9 at LiveNation.com and through the Live Nation app.

The "No More Tours 2" tour launched in May 2018 in Santiago, Chile for solo shows in three countries followed by a six-week European leg of headlining solo dates and festival performances. A North American tour followed kicking off August 30 in Allentown, Pennsyvania, with the final four shows of that leg of the tour postponed for Ozzy to recover from an infection. Those four shows — Shoreline Amphitheatre in Mountain View, CA, North Island Credit Union Amphitheatre in Chula Vista, the Hollywood Bowl in Los Angeles and MGM Grand Garden Arena in Las Vegas — will now conclude the 2019 dates. Tickets for these rescheduled dates are on sale now at LiveNation.com. The trek will also include a newly announced June 11 stop at Madison Square Garden in New York City. Prior to his 2019 dates, Ozzy will headline a special New Year's Eve Ozzfest spectacular at the Forum in Los Angeles.

On his upcoming farewell world tour, produced by Live Nation, Osbourne will celebrate more than five decades as a performer (both as a solo artist and as lead singer of Black Sabbath which formed in 1968). This tour, expected to take Ozzy around the world with dates into 2020, will mark the end of global touring for the legendary artist, though he will continue to perform select live shows in the future. Throughout his career, Ozzy has sold more than 100 million records.

This will mark the first time Megadeth will join Osbourne for a full tour, although they have performed together previously at Ozzfest and other festivals around the world. 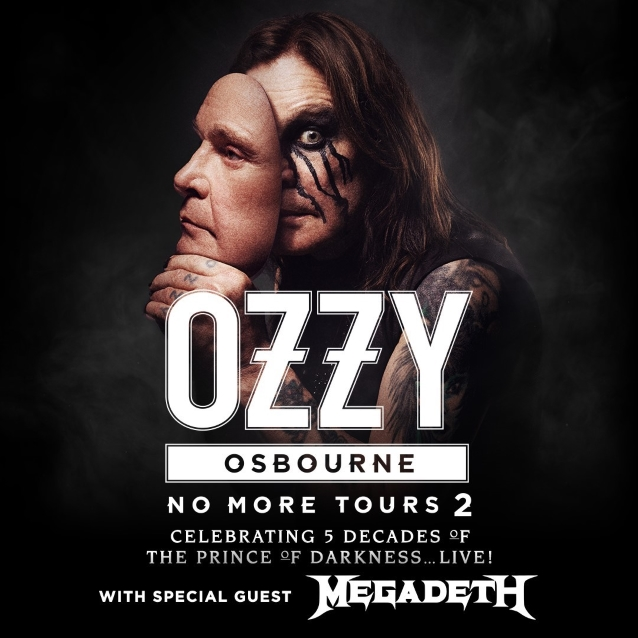 Although Ozzy's current solo tour is billed "No More Tours 2" and has been advertised as his last major world trek, he insisted that he's not going away entirely, saying: "What I'm stopping is doing what I'm doing now — going around the world all the time. I wish people would understand I'm not retiring. Is it my bad English accent? It's called the 'No More Tours' tour. It doesn't say 'No more tours ever.'"

The legendary singer said that he's easing back on the heavy road schedule in order to be with his family, remarking: "I've got grandchildren that I want to spend time with." But he added that he's been lucky to do what he's been doing for 50 years, saying: "I don't punch a card every morning This is not my job; it's my passion. It's been the best thing that's ever happened to me in my life."

"No More Tours 2" is a reference to Ozzy's 1992 "No More Tours" trek, which marked the first time the singer announced the end of his days as a touring artist. The tour name was a pun based on the title of his then-most recent solo album, "No More Tears". Ozzy returned to action three years later and has been on the road ever since.

Last year, Ozzy reunited with guitarist Zakk Wylde, who played on studio albums such as "No Rest For The Wicked", "No More Tears" and "Ozzmosis" and who has toured on and off with Ozzy for nearly 30 years.

© 2020 MusicHearts. Use of materials MusicHearts.ru allowed only with the active link to the source. All rights to the image and text belong to their author.
working on Lucky Framework 21.03 Mercurielle, 38
Common Questions info@musichearts.tv