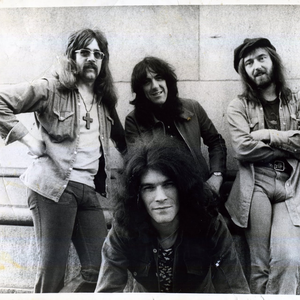 Nazareth is a Scottish hard rock band, founded in Dunfermline, Scotland, in 1968, that had several hits in the United Kingdom in the early 1970s, and established an international audience with their 1975 album Hair of the Dog. Perhaps their best-known hit single was a cover of the Felice and Boudleaux Bryant penned ballad, "Love Hurts, in 1975. The band continues to record and tour.
Nazareth was formed out of the ashes of the semi-professional Dunfermline group The Shadettes formed in 1961 by vocalist Dan McCafferty, guitarist Manny Charlton (ex Mark V and The Red Hawks), bassist Pete Agnew, and drummer Darrell Sweet. They took their name from the first line of The Band's classic song "The Weight" ("I pulled into Nazareth / Was feelin' about half past dead...")
The band moved to London, England in 1970, and released their self-titled debut album in 1971. After getting some attention with their second album Exercises, released in 1972, Nazareth supported Deep Purple on tour, and issued the Roger Glover produced, Razamanaz, in early 1973. This collection spawned two UK Top Ten hits, "Broken Down Angel" and "Bad Bad Boy". This was followed by Loud 'N' Proud in late 1973, which contained another hit single with a hard-rocking cover of Joni Mitchell's song "This Flight Tonight". Then came another album Rampant, in 1974, that was equally successful although its only single, "Shanghai'ed in Shanghai", narrowly missed the British Top 40. A non-album song, again a cover version, this time of Tomorrow's "My White Bicycle", was a UK Top 20 entry in 1975.