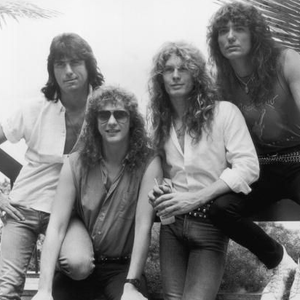 Whitesnake are an English hard rock band, founded in 1978 by vocalist David Coverdale (formerly of Deep Purple) in North Yorkshire, UK. The current line-up of the band also include Joel Hoekstra (lead guitar), Reb Beach (rhythm guitar), Michael Devin (bass), Brian Ruedy (keyboards) and Tommy Aldridge (drums). While the group's membership has fluctuated, Coverdale remains the heart and soul of the band.
In their early years, Whitesnake played in a hard-edged blues rock and heavy metal influenced style. By the mid-80s, the band had moved towards a more commercially friendly arena rock and pop metal ethos, garnering them major hits such as "Love Ain't No Stranger", "Now You're Gone", "Slide It In", "Still of the Night", and the iconic tune "Here I Go Again" (arguably their 'signature song'). They were named the 85th greatest hard rock band of all time by VH1.
Whitesnake were active primarily in the 80s, but they still tour, albeit with an entirely new line-up (bar Coverdale), to this day. Some of the most famous musicians who have joined the band for a time include Jon Lord, Ian Paice, Cozy Powell, Neil Murray, Bernie Marsden, Micky Moody, Rudy Sarzo, John Sykes, Adrian Vandenberg, Vivian Campbell, Tommy Aldridge, and Steve Vai.

Alex
Become a fan Cease to be a fan